How To Fix a Smoking Fireplace

When you’re settling in for a cozy evening near the fireplace, the last thing you want to see is smoke coming back down the chimney. You may ask yourself: Why is this happening? Is there an issue with fireplace safety? Do I need to schedule a chimney cleaning? 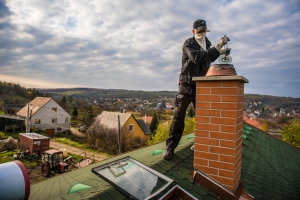 There are several reasons fireplace smoke flows back into the room. Some of them are common and easy to fix; others take a little investigation. Let’s look at some of the possibilities and what you can do to fix them.

The most likely reason smoke comes down the chimney is a closed damper. A damper acts as a lid for the chimney to keep debris and rain out. It is usually closed during the summer and sometimes during the winter when the fireplace isn’t in use. It must be open when you build a fire, or the smoke will be blocked from going up the chimney.

To see if the damper is open, look up the chimney with a flashlight. A handle inside the fireplace opens and closes the damper, and notches along the handle let you adjust the width of the opening. Don’t try to touch the handle if you’ve already built a fire; it will be too hot. Use a fireplace tool to open it.

If you’ve checked that the damper is open and you still have smoke in the house, a blockage is another possibility. 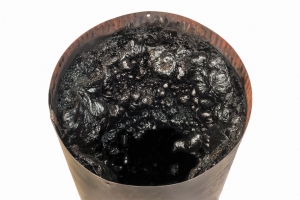 One of the most common and dangerous chimney blockages is creosote buildup. Burning wood produces by-products that combine with moisture to make creosote that goes up the chimney and accumulates on the flue lining.

Keeping creosote buildup under control is important to fireplace safety. Before the heating season, call a professional to inspect your chimney and fireplace. If a creosote layer thicker than 1/8 inch has accumulated, a chimney cleaning will remove the creosote and avoid the risk of fire.

Animals, birds and insects often find refuge in the sheltered confines of a chimney. Nests and debris they bring in can build up and cause a blockage. Even spider webs can redirect the flow of air.

If you have a blockage caused by animals, call a professional chimney cleaner to remove the debris. Do not light a fire until the chimney is cleared.

The weather outside can sometimes cause smoke to blow down the chimney. Very cold weather and wind drafting are common reasons.

When temperatures are very low, a flue that hasn’t been used can collect dense, cold air capable of blocking the flow of smoke through the chimney. You may experience this phenomenon more frequently if your chimney is built on the outside of your home. Warming the air in your flue will help. Build a small newspaper fire in the back of your chimney box and keep feeding it until smoke goes up the chimney.

An especially windy day can create a downdraft, keeping smoke from escaping or even blowing it back into your room. The problem can be exacerbated by nearby tall trees. Keep trees trimmed so that they are no closer to the chimney than 10 feet, and if it’s a really windy day, you might want to skip the fire.

Insufficient Air in the Room

A fire burning in the fireplace pulls lots of air up the chimney and out of the house. Air must come into the house from another source to replace it, or air (and smoke) will blow back down the chimney. Efficient homes with insulation and weather stripping don’t have cracks and crevices for air to sneak in, so you will need to open a window for air intake.

If you don’t want to open a window every time you build a fire, a mason can install an air supply vent in the fireplace. This will allow air to come in from outside while a fire is burning so that smoke can go up the chimney. 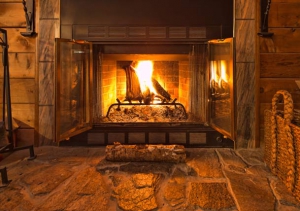 A warm fire is such a comfort on long winter nights. You’ll want to get as much enjoyment as possible from your fireplace, and with proper maintenance and the right burning materials, you can. Call a professional to inspect and clean your fireplace and chimney at least once a year and more frequently if you use it often. You’ll be able to enjoy a cozy, crackling fire all season long.

Our companies are backed by the Five Star Guarantee. Call one today!